APPEALS COURT RULES IN FAVOR OF SNOWMOBILING IN ADIRONDACKS

I’m feeling selfishly giddy over a decision recently handed down by the New York State Court of Appeals regarding snowmobiling in the Adirondack Park. The decision supports the use of an interior road in the Adirondacks as a snowmobile trail.

That said, I am not a snowmobiler; I have no interest in snowmobiles and I believe that —like any other recreational vehicle —you should not be able to use them anywhere or anytime you like, just because it makes you feel good.

As the Finch, Pruyn deal started unfolding in 2012, I foolishly felt there was a chance that the recreation and environmental communities would see that while it was a big investment, people would feel good about it because everyone --all of the stakeholders --would have access to it.

Then the horse trading began. Through the entirety of the Adirondack Park Agency’s land classification process into and through the Department of Environmental Conservation’s development of Recreation Management Plans for the more than 65,000 acres involved, it was obvious the environmental community wanted to limit access as much as it could. They rallied their troops and launched a lobbying effort to have the land classified as wilderness, thereby severely limiting access, meaning that nothing but foot traffic would be allowed. And, once the land was classified, they would see that the Recreation Management Plans developed by DEC would limit activity even on those lands classified as wild forest where more intensive use was to be allowed.

The commitment that then-DEC Commissioner Joe Martens made in 2012 was "there will be access for everyone,” but it wasn’t worth the paper it wasn’t written on. His commitment for access quickly shaped up to be the age-old “trust me” rope-a-dope. Seven years later the economic boon to the region promised by Gov. Andrew Cuomo has yet to materialize in large measure because so few people are able to access the property.

Access to the two main parcels conveyed to the state —the Chain Lakes parcel and the Boreas Ponds parcel —is severely limited, especially if you consider the fact that none of us is getting any younger and use of the interior reaches are now limited to foot traffic in spite of the fact there is a viable network of roads that have existed there for many decades. Prior to the state taking possession logging trucks used many of the roads.

During winter the roads are impassable and largely empty of foot traffic because of the snow. Using these back country roads as snowmobile trails makes good sense. Snowmobiling is an important economic engine for the region. Of the estimated 10,000 miles of snowmobile trails in New York, 1,800 of them are in the Adirondack Park; 750 of those are in Hamilton County, where the Chain Lakes are located.

A recent court decision supports the use of an interior road in the Adirondacks as a snowmobile trail.

Unfortunately, plans to use the Chain Lakes Road as a snowmobile corridor were scuttled by a lawsuit filed by Adirondack Wild. The Adirondack Council also joined the fray by filing an amicus curiae brief (friend of the court). An amicus brief is filed with an appellate court by a party that is neither plaintiff nor defendant in the suit, but which has an interest in the court’s decision.

Obviously, both of these environmental organizations would have an interest in stopping development of the trail. Their vision for the Adirondacks is a private park for 1% of the population, paid for by all the state’s taxpayers.

The suit challenged the DEC’s approval of the use of the Chain Lakes Road, claiming the trail would violate state law, specifically the APA Master Plan and the Wild, Scenic and Recreational Rivers Act. Clearly, they have no interest in the region’s economic issues and the fact that the Adirondack Park’s 137,000 year-round residents struggle to make a living there.

Recently New York's highest state court rejected Adirondack Wild’s claim and ruled in favor of the DEC, thereby paving the way for the snowmobile trail. The Access the Adirondacks Alliance has applauded the decision, noting that the court held that the snowmobile trail is permitted in that location because it is the continuation of a use predating the enactment of the Rivers Act.The Appeals Court also rejected Adirondack Wild's claim that the Adirondack State Land Master Plan trumps the Rivers Act.

The Alliance is a coalition of conservation, recreation, local government, businesses and sportsmen groups, including the 70,000 members of the New York State Snowmobile Association. Alliance members believe all outdoor open space recreational uses should be allowed in the Forest Preserve, as defined in the State Land Master Plan. They further argue that 3 million acres —the state-owned land in the park —is enough to accommodate all uses without negatively impacting the ecosystem. Taxpayers of the State of New York paid to purchase these lands with the promise they would be open for public recreation and enjoyment.

But is the battle really over?

Environmental organizations have been doing a lot of muscle flexing in the Adirondack Park for years, most of the time at the cost of the regional economy. This decision could possibly open the door on many access issues. Maybe back country hunters and anglers will eventually see some benefit. Only time will tell.

As for the battle over the Chain Lakes Road and the snowmobile trail, I think this decision may stand 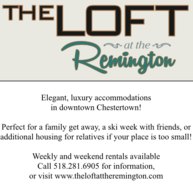