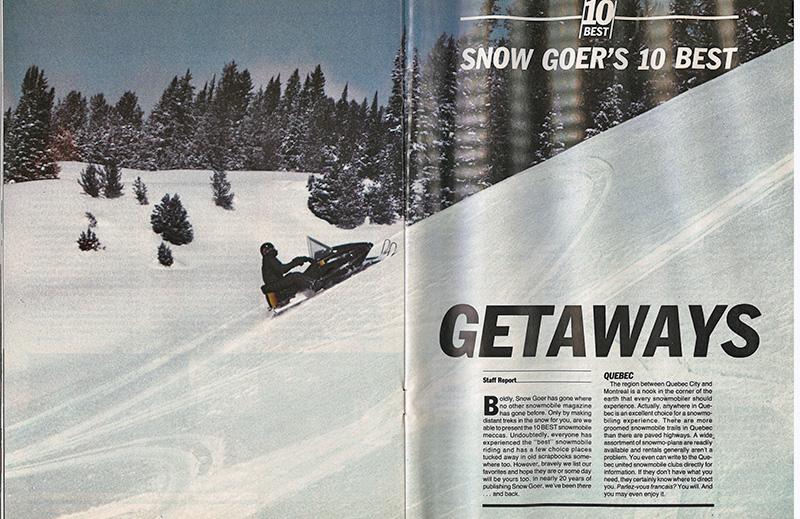 In one of the last issues of Snow Goer before it “went dark” for a few years, the then-editors created the “Our Bests Issue.” It featured a bunch of 10 Best lists – including but not limited to the 10 best sleds ever, 10 best add-ons, 10 best snowmobilers, 10 best snow cruisers, and more.

And, the issue featured the 10 Best Getaways for snowmobiling. Looking at the list now (posted below), we can’t argue with any of their picks 37 years later! Oh sure, we can think of some they left out — it seems a crime that Maine, Ontario, B.C., and several others didn’t make the list. But, then again, if you HAVE to limit the list to 10, who in this original list from 1985 are you going to kick out?!

So here it is, ripped from the pages of the December/January 1985 issue, “Snow Goer’s 10 Best Getaways” for snowmobiling. (FYI, you can buy a printed copy of this special edition of Snow Goer now on the SnowGoerStore website. We have 8 in stock, as of this posting.)

Boldly, Snow Goer has gone where no other snowmobile magazine has gone before. Only by making distant treks in the snow for you, are we able to present the 10 BEST snowmobile meccas. Undoubtedly, everyone has experienced the “best” snowmobile riding and has a few choice places tucked away in old scrapbooks some­where, too. However, bravely we list our favorites and hope they are or some day will be yours, too. In nearly 20 years of publishing Snow Goer, we’ve been there … and back.

The region between Quebec City and Montreal is a nook in the corner of the earth that every snowmobiler should experience. Actually, anywhere in Que­bec is an excellent choice for a snowmo­biIing experience. There are more groomed snowmobile trails in Quebec than there are paved highways. A wide assortment of snowmo-plans are readily available and rentals generally aren’t a problem. You even can write to the Que­bec united snowmobile clubs directly for information. If they don’t have what you need, they certainty know where to direct you. Parlez-vous francsais? You will. And you may even enjoy it.

Ironwood, Houghton, Copper Harbor and the whole Keweenaw Peninsula. These areas are true snowmobile havens. Michigan’s Upper Peninsula, or, simply the U.P., is blessed by “lake effects,” snowfalls that create a unique pocket of early snow, heavy snow and late snow. And what a blessing it is for snowmobilers. The U.P. is generally the first place to get snow in the Midwest, receives hundreds of inches in a season and has snow long after it has melted elsewhere. The U.P. has extensive trail systems and a great ‘biler attitude. The U.P. has been an old standby for diehard snowmobilers in Michigan, Wisconsin and Minnesota.

This mountain area around northwestern Wyoming, eastern Idaho and southern Montana has long been a hotbed for super-enthusiast snowmobilers. Old Faithful and Yellowstone Park in the winter provides a unique snowmobile adventure, even though the tours are at a restrained pace. You take this trip for the scenery, not the hot-dogging. Cooke City, Mont., to the east is where you can really stretch out for high adventure. Drop Daisy or take a run down Lulu if your courage is running high. For the ultimate macho ride, tackle the Tetons in the spring when the snow is rock hard and you can ride where you never, ever thought you could go before. To enjoy the scenery and to see the countryside, there are several ranches near the Jack­son Hole basin that cater to snowmobilers. And don’t miss the Million Dollar Cowboy Bar in downtown Jackson.

The Black Hills and Badlands provide excellent riding with snows averaging over 150 inches a year and first class accommodations. Ever see a Buffalo other than on a nickel? The Black Hills are the first of the “mountains” as you head West. Although these mountains are pretty tame compared to the Rockies, they are quite exhilarating for Midwestern flatlanders. Yeehaw!

Upstate New York is a snowmobiling playground for thousands of Eastern snowmobilers. On the westem foothills is the Old Forge area and the somewhat famous airstrip where the hot sleds come to play. On the eastern fringe is Lake George, a beautiful area of rolling hills and the expansive lake itself. In the north-central area is Lake Placid, where winter sports of all kinds abound. New York is not just the Big Apple. Upstate New York offers some first-class riding.

A favorite recreation area summer and winter, the Brainerd area boasts hundreds of miles of trails and first-class accommodations. Minnesota is the land of 10,000 lakes – and nearly as many resorts. There’s wide-open running on the lakes or super woods running to test your prowess and nerve. Or, just take a nice, peaceful ride through the pines and fill your lungs with clean air.

The highest mountains in the lower 48 are in Colorado. There are virtually end­less places to ride and one monster mountain just leads to another, and another and, well, you get the idea. Grand Lake is the hub of Colorado snow­mobiling activity, with plenty of groomed and marked trails leading to resorts and other accommodations that really throw out the welcome mat for snowmobilers. You’ve heard of places like Aspen and Vail? All that winter fun shouldn’t be the sole domain of the skiers. Colorado is for snowmobilers, too!

Crater Lake is one of the greatest natural beauties in America. In the winter, it is simply awesome. Just north of Crater Lake Park is the Diamond Lake area, where you can rent snow­mobiles and get a guided tour to boot. (Great sum­mer fishing makes this a great year-round resort.) Nestled on the southern fringe of the Cascade Mountain range, this area is the first extreme eleva­tion east of the Pacific Ocean and may explain the heavy snowfall. How much? Well, on the aver­age, snowfall at Crater Lake National Park has been 500 inches per win­ter season. A mere 18 miles to the north, the Dia­mond Lake Resort aver­ages about 300 inches each season.

Wisconsin’s Northwoods offer some exceptional snowmobiling. The many places we have traveled to in northern Wisconsin have never failed us. The two, general areas we have the most experience with, and we can recommend with­ out hesitation, are the Rice Lake­-Spooner-Hayward-Cable area to the west and the Minocqua-Eagle River­-Rhinelander area to the east. It’s not that the snow is any better here than in other parts of northern Wisconsin, it’s just that we can tell you first hand that we know the accommodations in these areas are first class. And everybody speaks the snowmobiling language.

When New Englanders go snowmo­biling, many take to the “VAST” network of trails in Vermont. VAST stands for Vermont Association of Snow Travelers, a unique group of dedicated snowmo­bilers that have built and maintained the more than 1,200 miles of groomed corri­dor trails throughout the state. These snowmobile highways offer beautiful scenery and complete accommodations. VAST membership and registration are required to use the trails, but that’s a small price to pay for trails this good.